The three stages of dementia

Dignified care in all stages of dementia

Do you know what characterizes each of the three phases of dementia? Find out the characteristics of each stage and see how you can offer the best help in each phase.

In the early stage of dementia, people close to the patient may start noticing small changes in behavior or capacities, such as forgetting recent events.  In the beginning, dementia is easy to hide and the signs are easy to overlook.

Common symptoms of the early stage of dementia include:

But be aware, symptoms of early stage dementia are often mistaken with symptoms of other diseases, such as depression, UTI’s, or with side effects of medications.

This is why it’s particularly important to go through thorough early diagnosis and diagnostics to rule out any other illness (or to be aware of what else could be causing symptoms to worsen).

The early stage feels like the ‘threatened’ stage. Because they feel threatened, people in this stage often respond with denial, hiding, anger, withdrawal , and gloom.

Early diagnosis is important to rule out any other illness, or to be aware of what other factors, such as medications, could be causing symptoms to worsen.

In the middle stage of dementia, the patient starts to forget more, repeats things, and may have trouble recognizing people. There is an increasing disorientation in time and place.

Common symptoms of the middle stage of dementia include: 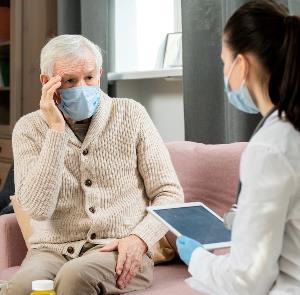 The middle stage feels like the “lost” stage, and the symptoms are now clear to feel and see. It feels difficult to do daily activities and maintain a normal conversation.

Tips for dignified care in the middle stage of dementia:

Accepting that the person with dementia now need guidance and help in daily activities, including personal care, makes it easier to provide dignified care in the middle stage of dementia.

In the late stage of dementia, the patient is decreasingly aware of who they are and who is around them and interacts less with their surroundings.

Common symptoms of the late stage of dementia include:

The late stage of dementia feels like the “hidden” stage. All sense of time, space and place has disappeared. The body still registers basic needs such as warmth, hunger, and pain. Moving is now difficult, and eventually the patient will be dependent on a wheelchair or completely bedridden. While the voice may still work, it is increasingly difficult to understand.  Basic needs and emotions are eventually communicated via repeated movements and sounds.

It is not uncommon to be completely incontinent. It may also become difficult to chew and swallow food.

In the late stage of dementia, help and support is now needed in most daily activities. The best help is to provide comfort for the patient while taking care of the essentials (hygiene, hunger, pain, warmth).

As a family caregiver, one way to provide comfort is to follow the flow and pace of the patient.  When a person with dementia feels comfortable and relaxed, they may suddenly say clear things or sing a song.

Incontinence and other toileting challenges are common in people with dementia, but also an often overseen aspect of dementia care. Read more about Incontinence and dementia